After the next Hunger Games movie comes out, they’re going to start releasing prequels so the ADVENTURE ISN’T OVER YET. (In unrelated news: I have the literary and cinematic maturity of a 13-year-old girl.)

That’s not actually what I was gonna say, though. Guess what else!

That’s right – this week marks my one-year anniversary of starting this blog!!!

This fact was brought to my attention by Timehop, perhaps the greatest social invention of our generation. 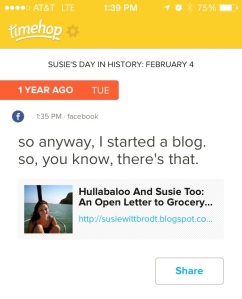 “You LIAR, I’m looking at your archived posts right now and they go all the way back to December 2013!” – Nobody

Well, Nobody, technically you’re right. I had a full two months of blogging under my belt before I worked up the courage to tell anyone. But I’m still counting this as my anniversary because uh… well, because this is my blog and I don’t have to answer to Nobody. (baddum, tsssss)

To celebrate this momentous occasion, I thought I’d pull a 90s-sitcom-series-finale and do a flashback montage of all its greatest hits.

The thing is, guys, this blog changed my life.

This blog post got me a job (a job I absolutely love). This one was featured on Freshly Pressed, which catapulted my love of blogging to a new dimension. This one helped me cope with my tumultuous year of three-moves-in-10-months, and this one and this one acted as writing therapy as I went through my recent break-up.

I wrote not one open letter but two – and I went through this weird phase where I really wanted to share my thoughts on random things like happiness and motivation and decision-making. I’m honored and humbled to report that my schoolteacher aunt used this post to demonstrate the literary term “hyperbole” to her students.

I also got the opportunity to publicly reminisce about my childhood via journal entries dating back to 1997, tell a heartbreaking story of 5th grade love and loss, and unearth an old Girl Scout project that hadn’t seen the light of day in 10 years.

And finally, I talked about being awkward an awful lot… because I am. I am really awkward.

It’s been a pretty sweet year, y’all – thanks for humoring me. Here’s to many more random posts to come.

Hi there! My name is Susie. I started a blog called the Nutshell Version back when I was young and naive enough to believe people wanted to read such nonsense. Fortunately, some people did! For several years now I’ve been posting periodic, occasionally entertaining ramblings about any old thing – from sharks to cowboys to dating.

I hope you like it. :) If you do, consider supporting my crippling caffeine addiction below.