So next week marks a full three months since I moved to Portland.

I know, I know, that’s not completely true. Technically I moved to the Portland area a little over a year ago, but aside from my god-awful daily commute, I didn’t do a whole lot of exploring in the City Proper. Which is nothing short of a travesty.

But since then, I’ve upheaved my whole life and plopped my lost little self down in the throbbing heart of the city… and believe you me – I’ve made up for lost time.

I considered trying to tally the number of bars, restaurants, coffee shops, food carts, and shows I’ve been to since beginning this exploration… but just the thought of that task overwhelms me.

Instead, I’m just going to sit down for a moment and explain to you how absolutely, unequivocally, head-over-heels in love I am with this incredible town.

Elizabeth Gilbert taught me that when keeping chickens, there are some circumstances where you have to introduce a new hen to the flock. And you can’t just toss it in with the old chickens, or they’ll see it as an invader – instead, you slip the new bird into the coop in the middle of the night while the others are asleep.

This is exactly how I arrived in Portland.

Without further ado, here’s why Portland is the absolute best city on Earth, no arguments, I’m not even listening to you anymore:

Friends. Before moving here, I was so nervous about starting a brand new life by myself, so worried that I wouldn’t know where to go or what to do, so terrified of being alone and so far from everything I knew and loved. I’ve had the same group of friends since I was 12 years old, and I’m not historically good with new people… so before the move, I caught myself awake in bed at 1am, reading articles entitled things like “How to Make Friends as an Adult.”

But as it turns out, Portland was basically built for people just like me. Want endless new activity options like haunted pub crawls and underwear bike rides? Check! Looking for somewhere with a rich culture, and inhabitants who are immensely passionate about art, music, craft beer, or all of the above? Check check! Need a city where 60% of the population are fellow transplants from other states, so literally everyone you meet is on a let’s-explore-and-try-new-things-and-go-on-adventures kick? Check, check, check! Living in Portland is like having a making-new-friends starter kit.

Weirdness. They’re not kidding when they call Portland weird – the whole city is an island of misfit toys. If America were a high school lunchroom, Portland would be the table of eclecticism – it would include a few band geeks, some sign-carrying activists, brooding artists, gregarious performers, bookworms, that guy who goes barefoot because he thinks shoes are a sign of oppression, and probably a unicyclist. If the whole rest of the country asks you to fit into a stereotype (“Oh, you’re from San Diego? Do you surf?”), Portland is where stereotypes go to die. It’s the type of city to open its arms and say, “Yeah – we know you’re a freak. It’s cool, though, we are too. Come on in.” 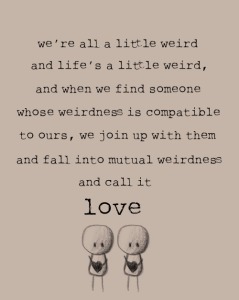 Weather. Speaking of San Diego, the main thing I was warned about here was the rain. In fact, it was more or less all I heard about. When I finally arrived here, and I kept hearing about the rain, I actually got really defensive about it. I told all my San Diego friends that it didn’t even rain that much, we actually went 125 days in a row last year without a single rainy day, and that it was beautiful and sunny a LOT of the time and that they shouldn’t believe everything they hear.

But as a bona fide Portlander now, I’m not going to say that anymore. In fact, I think I’m contractually obligated to tell you the following:

It rains. SO. MUCH. All day, every day. Portland is a horrible, gray, rainy city all the time. Tell your friends. No sunshine, EVER. Nothing to see here, people. Move along.

People. The other thing? Portland people really are the best people in the world. I don’t know what it is, maybe there’s something in the water. Maybe we’re all just so relieved to finally fit in somewhere, maybe we’re all just collectively exploring who we are, maybe we’re just sharing this adventure together. But Portlanders are a special breed – legitimately kind, genuine and curious and dimensional.

And good people. Remember that time when a complete stranger went miles out of his way to help me change a flat tire? Remember Bearded Ryan, the superhero who embarked on a wild goose chase to track me down and return personal documents to me that he’d found on the side of the road? And of course, the person who had every right to screw me over, but instead left me a friendly reminder to be a better person:

the cool thing about #portland is that when I do an admittedly asshole-ish parking job, the frustrated citizen leaves me a note kindly encouraging me to "think of others"…instead of, you know, keying my car or something. I shan't transgress again, kind portlander. thanks for being awesome.

These were all Portlanders. Do you get what I’m saying?

The city. You guys, I get to walk to work every day. Which is something I’ve never had the privilege of saying, and it’s freaking oh-my-god-crazy-fantastic.

Have you ever lived in a city before? I mean in an actual living, pulsating city with an actual heartbeat and a personality? Have you ever walked through that city by yourself on a lively evening? Have you done it in boots and a peacoat, with really good music in your headphones, and the kindest people on Earth nodding at you cheerfully as you pass?

The country. Little-known fact (actually it’s probably pretty widely known, I’m just really in the dark about everything, all the time): Portland is the largest city in Oregon. And even Portland, in fact, is pretty tiny with all things considered: it’s made up of approximately 584k people – about 18% of the population of, say, San Diego County for instance.

And the rest of Oregon? Get this: the entire state is made up of less than 4mm people. Meaning Portland makes up roughly a sixth of the population of Oregon, even though the city itself only accounts for 0.14% (less than a quarter of a percent) in total square mileage.

All this to say, a lot of my state is made up of the polar opposite of my quirky urban setting: quaint, rural towns where people raise livestock and farm Christmas trees on acres and acres of land. Last night, I had the pleasure of attending a pie auction in one of these towns – the proceeds of which went to a modest scholarship fund for high-achieving youths at their local high school.

A pie auction, you guys. Pies that had won awards at county fairs, women who I’m sure had perfected recipes over generations, a hundred people crammed into what used to be a high school gym – where everyone knew each other by first name and teased one another affectionately (“Next up – a chocolate fudge pie, which we all know is going to Hank…”). It was wholesome and authentic and it absolutely warmed my heart.

The forest. Last but not least, Portland would be incomplete without the glory of nature that surrounds us. They don’t call them evergreens for nothing – the Pacific Northwest is overgrowing with life. Vines creeping around light posts, rogue leaves peeking through cracks in the sidewalk… and moss, endless and everywhere.

You get the sense that if the apocalypse came tomorrow, it wouldn’t take long for the Earth to reclaim this city – the land is practically twitching with anticipation for it. In literally every direction there is green, trees and plants who seem almost smug in their assuredness. And it only takes a short stroll off the beaten path, into another world where long leafy tendrils are draped across great mossy branches – to be reminded of how small we really are, how trivial our problems, how life will continue going on long after we’re gone.

That’s what Portland is, really – the perfect blend of city, country, and forest. The most amazing people, the most incredible culture, and the most delicious food carts. (Oh right I didn’t even talk about those…)

Long story short, here I am: three months in, surrounded by a collection of truly amazing people and with a ton of new experiences under my belt… and I’m actually awed at how anxious I originally was. Because now that I’m here, it seems odd that I’ve ever been anywhere else.

I slipped into Portland like a bird in the night, and it feels as if I must have been here the whole time.

7 thoughts on “Why Portland is the Greatest City in the World, No I’m Serious, Stop Arguing You’ve Already Lost.”

Hi there! My name is Susie. I started a blog called the Nutshell Version back when I was young and naive enough to believe people wanted to read such nonsense. Fortunately, some people did! For several years now I’ve been posting periodic, occasionally entertaining ramblings about any old thing – from sharks to cowboys to dating.

I hope you like it. :) If you do, consider supporting my crippling caffeine addiction below.